We just love Solar so much! Her progress has been very rapid and we think that’s because she’s whip-smart.

Her and our cat aren’t besties but it’s only been a little over 3 months. The 4 of us do all sleep in the same bed some nights, so that’s something! I think Solar wants to play with the cat sometimes but our cat wants none of it. We discourage Solar from chasing the cat and have to give her time-outs sometimes to calm down. For the most part, they co-exist rather peacefully. It’s usually the cat that will start growling or taking random swipes for no reason.

Solar is very food motivated and a little food crazy, sometimes sniffing all around the apt trying to find little bits on the ground – even if we had just fed her!

Solar has been such an amazing addition to our menagerie of animals and we’re all getting to know each other’s personality quirks as each day passes. We’re working on her training every day. She just loves to snuggle with us and is incredibly playful for several bouts throughout the day. She loves playing fetch and tug! She also loves to wrestle with her “papa” too! 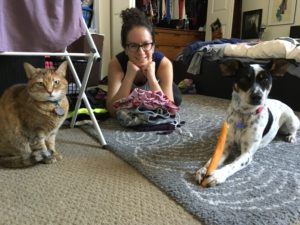 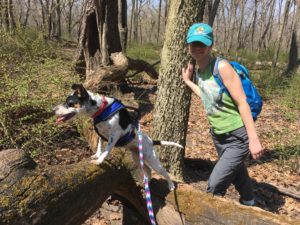